The fourth seasonal was played at the traditional location of Liemeer, only 30 minutes from Noordwijk.   Unfortunately, due to the Covid-19 restrictions dinner was not possible and the 19th hole was cancelled.   Liemeer kindly agreed to apply the much lower Introductory green fee of just € 42,50 to compensate, very nice club.

EGC members are being excellent at self isolating and there was only one cancellation and a good turnout of 21 players distributed over 7 flights.

The weather was very good for October with about 16 degrees and a force 3 wind and even sunshine.

Poor Peter had a tough start as a lady had nicked his buggy so he missed his warm up while another was arranged.

The marshal made a special stop to check that David was OK in just a polo shirt.   I am sure there were many interesting events but I can only report those from my flight.  We had a mixture of golf with the low being hole 14, the shortest hole where we all had terrible tee shots and scratched.   Hole 18 was the highlight, Vincent had 185m for his second shot and was rather upset that his ball found the end of the water, but fortunately it was either a Jesus ball and jumped out or a fish headed it over.   All three of us managed a par.

The seasonals are a special EGC tradition and played on outside courses.   We did very well to play all four this year.   Many years ago the scores were generally very low.  These days we have much better scores, the top half scored 29 or above, which might reflect the low course rating at ESTEC.

Reno kindly ensured that the scores were entered into proware.   Thanks to everyone who came to play and sorry that we could not provide prizes.   A big congratulations to Alan on his lower handicap and still scoring 35 points, just pipping Gary to first place with a better back nine.

Stay safe and healthy and remember that golf helps to make you fitter and stronger.  Golf can also be frustrating with a bad shot so enjoy the good ones with a big smile.

The Final round of the Colin Rolls Trophy 2019 was played on Sunday in weather much better than endured in the ESA Cup a day earlier. Yet again there was a good attendance of 40 golfers but the balance per teams was not quite so even ranging from 3 to 7 pairs per team. All participants received a sleeve of golf balls from the sponsor Aurora.

The Foursome format is often a challenge as each flight shares one ball. This however is beneficial to allow a shotgun start. Six holes had 3 flights and one hole had 2 flights which allowed for a good pace on he course as there were 2 free holes.

There was a wide range in scores with the exceptional score of 38 by Nely Borst and Hanna Jones of The Mulligans, followed by Joe Pereira and Ronny Boer with 35 points from the Babes and Boys. Both of these scores were important to the overall standing as the Mulligans moved from 4th place to 2nd on 293 points and the Babes and Boys were this year’s winners on 300 points. Friday’s Men also had 293 points coming 3rd and last years winners Andy Caps slipped to 4th place on 289. 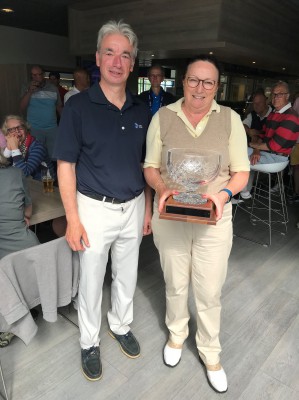 Then the Babes and Boys celebrated with their prizes a bottle of wine each. 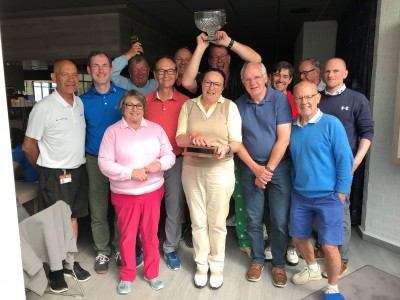 Reno kindly put together the full results below. Happy golfing for the rest of the year.

Sunday 26th
May was sunny, coolish for late May and with a brisk Force 4 SW breeze (helping
on hole 3) freshening later to F5 or F6.

Despite the
wind scoring was brisk with the top score of 44 Stableford being posted by the
Andy Cap’s Alex Jeanes and Elly Davis. The Fridays Men produced a 42
down to Brian Taylor and Georges Gourmelon and there were also two scores of 40
(Piet Hillebrand and Joe Periera for the B & B’s plus Dave Collins and Rod
Allen for Fridays Men). The fair Mulligans had no less than 3 scores of
39 (Nely Borst / Ineke Aalbers, Hanna Jones / Helma Nollen and Margaret Baston
/ Jan van Haarlem). Good scoring!

Two teams
were joint winners with 82 points: The Andy Caps and Fridays Men. Joint third
was the lot of The Babes and the Boys and The Mulligans with 78 points.

The overall
placings are getting interesting: The initial runaway lead of the Babes and
Boys has been whittled down to 4 points. The B&B’s still lead on 236
but Fridays Men are snapping at their heels on 232. Three points behind
that score are the Andy Caps on 229. The delightful Mulligans are a
full 10 points behind the leaders and need a miracle to claw back this margin
with only one event remaining. Not so for Fridays Men and the Andy caps are
also in the race.

It looks to
be an exciting prospect for the Foursomes to be held on 9th June
with a shotgun start at 13:00, assemble in Escape from 12:00.
Flights to be announced approx. 12:30. After the round prizes for the
best score in each event and for the winning team(s) will be awarded. And
of course the final overall winning team will get the magnificent trophy – the
wonderful Waterford bowl to conclude the CRT 2019.

The
betterball event had a lot of social clout judging by the Escape crowd at the
end of the betterball, for the usual refreshments.

Further
details are available from the team captains: Andy caps (Alex Jeanes), The
Babes and the Boys (Clare Bingham), Fridays Men (Reno Harboe-Sorensen) and The
Mulligans (Marja Allen). If you are inspired enough by this riveting
report you may wish to join the CRT or even start your own team. If so please
contact the organizer and sponsor Alex Jeanes (email: alexjeanes@aurora.nl).

Thanks are
due to the organizer and sponsor, Alex Jeanes of Aurora, the team captains, the
loyal players and of course the founder, Colin Rolls.

The second
event of the Colin Rolls Trophy 2019 was held on Sunday 14th
April. The weather was spring-like with a 10C, mostly sunny day but with
a firm breeze (1-to 2 clubs) from the East which kept the perceived
temperature quite a bit lower. The course is in reasonable firm condition
but with greens a bit on the slow side.

The field
was 21 playing teams of mostly 2 players and with 3 singles flights. The
format was Greensome which of course everyone is familiar with but involves
both players in a team teeing off and then selecting the most advantageous of
the 2 balls (or the least disadvantageous) for further play which is
alternative shots starting with the player whose ball it is not until the ball
is holed. Handicaps for the teams are calculated by adding 60% of the
lower handicapper to 40% of the higher handicap. Scoring is
Stableford. The 2 highest playing teams scores give the overall team
scores for the event.

You may
recall that after the Scramble the “Babes and the Boys” were clearly
leading by 5 points over the rest of the field close together.

The best
team score this time was again the “Babes and the Boys” with an impressive 71
points (best score was overall Clare and Piet with 37 Stableford). This gives
them an overall lead on 158 points. Second (again) was the fighting
“Fridays Men” with 68 points (4 teams all returned a score of 34 points,
the rest did not). Third was the delightful “Mulligans” with 67
points. Joint third was the gallant “Andy Caps” , also with 67
points. Filippo Pinna and Elco Fritzsche of the Caps also had a noble 37
points.

The overall
result is the same as after the Scramble with an increased lead for the “Babes
and the Boys” on 158 points, second is “Fridays Men” on 150 points. Third
spot is occupied by the “Mulligans” with 148 points. The Andy Caps are
just behind with 147 points. All is still to play fore!

For those
deranged enough to be more interested can get further details of the results
from the team captains: Babes: Clare Bingham, Mulligans: Marja Allen, Fridays
Men: Reno Harboe Sorensen and the Andy Caps: Alex Jeanes (also the organizer
and sponsor. Also you may wish to join the wonderful CRT community.
Just email Alex Jeanes for a team allocation (email: alexjeanes@aurora.nl)

Thanks Alex
for a well-organized event and to Aurora for sponsoring it. The CRT is
the most interesting event in our EGC calendar with the possible exception of
the Monthly. And to Colin Rolls, the originator, sadly no longer with us.

The next
CRT event will be the Betterball Competition to be held on 26th May
2019.

Report brilliantly written by Rod, as well as the results in full detail in the Excel file.