The last 2 matches ESTEC played in the Bedrijfsleague were statistically more difficult away games, with the first at Leeuwenbergh against PIT on July 15. PIT has gathered a strong team with very good players this year and are proving to be a force to be reckoned with for future years. Even though the ESTEC team got a bunch of shots in each game we still faced our first defeat of the season with a 3.5-2.5 loss to PIT.

On July 28 we only had BP left to play at Kleiburg. The League table by now saw ESTEC in second place with PIT one point above us but already having played their final match. BP, with a win, could also still pass us. And BP at Kleiburg is never an easy opponent. ESTEC had to win to secure the 2021 Bedrijfsleague victory! With terrible weather the entire week we got very lucky with only strong winds to content with but otherwise very pleasant (even sunny) conditions. The final scores were:

With this 1.5-4.5 win against BP ESTEC has secured the victory in the 2021 Bedrijfsleague! Shell and BP still have a match to play but can no longer catch us. In total 14 members played for the ESTEC team this year with each player playing an average of 3 games. Thanks to all team members for their contribution to this great result for the club! A special thanks goes to Anna Hjortnaes arranging Zeegersloot as our “homeclub” in 2021! Next year we hope we can get an even bigger team to represent ESTEC in this great competition to defend the title!

Erik, on behalf of Captain Vincent

On Monday March 1 the WHS handicaps will become active and the EGA handicaps will disappear. You can find your WHS handicap on your digital NGF card. On February 26 the NGF is planning an internal transfer of data so no handicap adjustments will take place on that day . Any qualifying cards entered on that day will be placed on hold and processed during the weekend. The weekend of 27 February will be the last time competitions will be held with the EGA handicaps.

For the WHS the NGF has distributed new handicap tables that will be in use starting March 1:

Latest info on the introduction of the WHS can be found on the NGF website here.

The snow has almost completely disappeared so the course will be open this weekend. The ground is still quite wet in places so please take care with trolley’s and repair your pitchmarks and divots.

Due to the current snow cover on the course there is no possibility to play golf and the course remains closed until further notice. At the moment we still have snow cover of over 20 cm on many places on the course. It is however a beautiful sight with mainly animal prints on the snow

Next week the temperature is expected to rise, but it will still take some time for all the snow to melt and after that the course to be dry enough to play on. We will open the registration for casual rounds for next weekend but there remains a reasonable chance the course needs more than a week to recover after the snow starts melting. Next week Friday the course conditions will be checked again for the weekend. 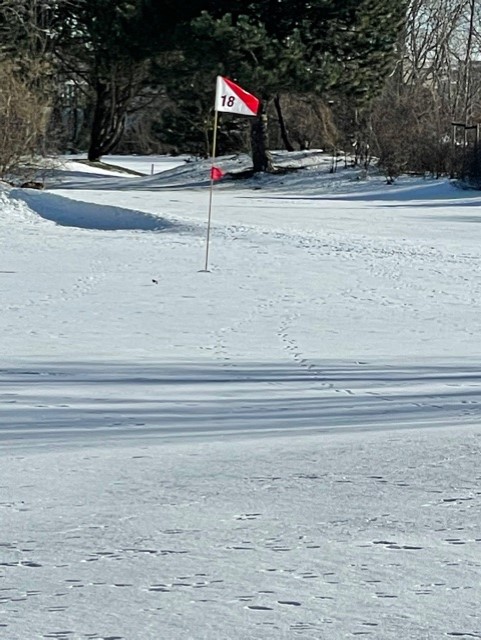